The present building was built in 1884 and as the other Methodist Churches in the town have closed the members have joined together at what is now St. John’s Burlington Methodist Church.  The significant dates are:

1957.  Promenade Methodist Church closed and the membership transferred to Burlington.  There had been connections between the two churches since 1941 when the then minister at Promenade also took pastoral charge at Burlington.

1970. St John’s Methodist Church amalgamated with Burlington and the name was change from Burlington to the combined name of St. John’s Burlington.  Both churches had been under the pastoral charge of the same minister since 1964.

2014.  Dedication of the new WW1 Memorial Plaque on Sunday 26th January. The service was led by Rev Chris Free. Present, was Miss Linda Ellis who had Commissioned the new plaque, and members representing various military associations.

A BRIEF HISTORY OF THE CHURCHES

It should be remembered that over the years the names of churches have changed mainly as a result of the Methodist Union in 1932 when the words Primitive, Wesleyan and United had to be dropped and also as churches have amalgamated and names were changed to recognise two societies joining together.

The first Society was formed in 1770 when John Wesley first visited Bridlington and the members originally met in one room. A chapel was built in 1775 near the top of St John Street. In 1803 a larger building was built and this is now part of the West Building Supplies building.

1906 saw the extension to build the Guild Room, toilets and kitchen with an upstairs parlour at a cost of £516 16s 0d.

There was a large redevelopment programme carried out in 2006 when a new kitchen, toilets and ancillary rooms were built at the rear of the premises and alterations at the front of the church to extend  the vestibule with other rooms by removing the rear two pews in the church.

Over the years the church has had many names, these being:

Changed to Burlington Methodist Church  in 1932 with Methodist Union as there were two churches which included the name St. John’s.  Burlington being an old name for the town and still used by many in the 1930’s and later when referring to this part of the town.

Changed to St. John’s Burlington in 1970 when joined by St John’s Methodist Church.

There was much dissent in the Wesleyan Church in the 1840’s and many including local preachers left or were expelled.  The groups in Bridlington and the surrounding villages came together to form a society associated with the Wesleyan Reform Movement.  Originally they held  services in a paint shop and then built a chapel in 1852.  This was replaced in 1872 at a cost of £3,000 by the church which was to remain until closed in 1957

Promenade closed in 1957 and the membership transferred to Burlington. There had been connections with Burlington since 1941 when the then Minister of Promenade also took Ministerial Charge at Burlington moving into the Burlington manse.

Most of the funds from the sale of Promenade went towards the building of the new Sewerby Methodist Church and this was commemorated by the use of stained glass from Promenade Church in a window in the Sewerby Church.

Prior to Methodist Union in 1932 Promenade was a member of the United Methodist Free Church. 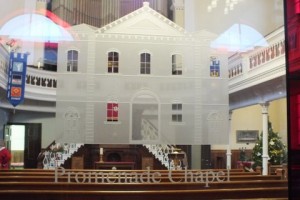 In 1823 a Bridlington directory says “In Old Burlington the Ranters or Primitive Methodists are by their zeal swelling their numbers”.

The church was closed in 1970 when the congregation moved a few yards down the street to join with the then Burlington to become St John’s Burlington. 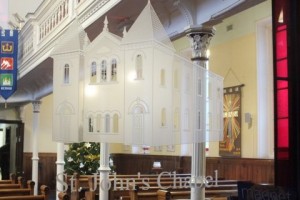 The original name of the church was Quay Primitive Methodist Church but was changed with Methodist Union in 1932 when the Names Wesleyan, Primitive and United were dropped.

The first Primitive Methodist Church at the Quay was built in 1833 on the Esplanade and was known as “the Ranter’s chapel”.  In 1870 a chapel was built on Chapel Street but this soon proved too small and in 1878 it was pulled down and replaced by a much larger building at a cost of £3,486.  This church was to remain until 1969 when the members joined with Quay Methodist Church which was then renamed Chapel Street Methodist Church.

The site of the Central Methodist Church is now occupied by Iceland Supermarket. 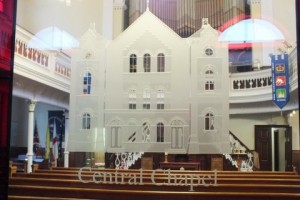 John Wesley’s journal for 1770 entry reads  “Wednesday, June 20th, I rode to Bridlington and preached on the Quay to many plain and many genteel people”. It was in this year that Societies were formed in both the Old Town and the Quay.

There are differing reports as to when the first church was built. Some record it as 1795 and others as 1810. Certainly there was a chapel built in 1810 in a street known as Back Street and the street was then renamed Chapel Street.  This chapel was further improved in 1840.

In 1873 a new chapel was built on the same site. This church closed in 1999 when the membership transferred to St John’s Burlington and Sewerby and the building was demolished in 2004. The site of the church is now occupied by shops at the entrance to the Promenades Shopping Centre.

The poet and hymn writer James Montgomery (1771-1854) was a frequent visitor to Bridlington in his later years and attended the then Quay Wesleyan Church.  It is said that after attending a Friday night prayer meeting he was walking along Sewerby cliffs when the inspiration came to write the hymn “Prayer is the soul’s sincere desire“. 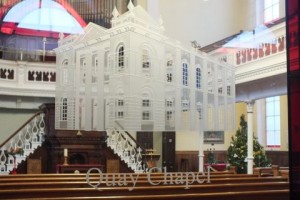 Compiled and researched by Eric Fell.